Life continues no matter what is going on in the world. During these difficult time I reflect upon my mother who is near 89 years young. I say young but sadly the passing few years have shown her aging rapidly. Looking at her white silver hair I think of her photos of days gone by when it was almost black and very brillo like sticking out wide as a long afro. But my mother is Scottish and not African blood although she boasted she was. We kids believed her. In fact we loved my mother's stories as well as her dreams which she related every morning as we ate breakfast. Back to the hard times... my mother Maria, lived in Scotland during WWll and survived the bombing by the Germans. Not many people know that Glasgow Scotland, once a shipping town, was devastated during that war. My mother married at the beginning of the war and at the end had two children with a third on the way. During the bombing, which always came at night, my father and mother would leap out of bed, wrap the baby (or later both) in blankets and escape out into the frigid dark. There, staying close to the buildings, they made their way to the bomb shelter. Another time, when in the shelter, they put my mother, who was pregnant under the table for safety. Well, lo and behold a piece of ceiling came in right on top of the table and it collapsed on top of her. She was okay, skinny brillo headed woman with a round baby belly. There were laughs but many tears as loved ones died. When things feel tough, I listen with the same awe, as my mother relates living through the war, bringing seven children to US alone and raising them all the while, making us laugh, dance to her piano playing and knowing she loves us completely. Then things don't seem so bad in the old USA.
at April 14, 2009 No comments:

FROM A DISTANCE: REMOTELY VIEW GHOSTS

SHELTER-IN-PLACE PSYCHIC VIEW OF PARANORMAL ACTIVITY Recently, I did a psychic remote viewing of a house in San Francisco built in... 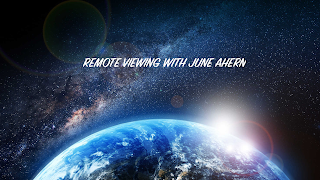 June, The Pen Goddess
Born in Scotland came to USA, San Francisco with my family at a young age. Enjoyed over 40 years in career as a psychic medium, metaphysical occult teacher and lecturer. Have authored four books, two screenplays and many articles.